Boy, are my arms tired!

In my last missive I forgot to mention a couple equipment issues we've uncovered.  The first being the lighting on the motorcycle.  When I bought the bike 10 years ago it seemed to me, at that time, the bike had a lot of light projecting out the front end.  During the last ten years it seems the amount of light has diminished considerably.  Either that or my night vision has been killed living in a constant state of lightedness the last eight years.  Regardless, after a dusk-to-night-time trip across the Broadus Highway I decided it was time to do something about this problem.  Not having much time or resources at my disposal I found myself at Wal-Mart.  I got a set of "driving lights" that uses H-3 bulbs.  I figured an additional 110 watts (total) streaming out the front would do a bit of good.  To ensure I got every last amp of current available to the lights I also picked up a relay kit so I could run the lights from the battery through a heavy-duty relay rather than directly trough a switch.  Sadly, the lights don't make much of a difference at all.  I think these things were meant more for "bling" than for actual lighting applications.  No, they are not "HID Simulators" .  Rather, they have a bit of an orange tint to them "To provide additional detail", said the package.  I'm going to continue to keep an eye out for a GOOD set of lights.  At least I've already got the relay system (and its 573 feet of wiring) installed so replacing the light assemblies shouldn't be too difficult.  I didn't notice until after I had the relay system installed that the switch supplied with it is not waterproof.  I tried capping it with a bit of RTV but all that did was make the switching action so stiff the push button switch wouldn't return to its normal position so I ended up peeling most of the RTV off the switch.

The other equipment issue we encountered was on the second day out.  Tamara had a bit of a "wardrobe malfunction".  No, she didn't flash anybody (this time).  The zipper on one of the legs of her riding pants fell apart.  It started with one of the sliders "spreading" apart a little bit and allowing the zipper to jump out.  It went from there to the slider actually falling apart and the second slider starting to spread.  She is now reliant upon the velcro tabs spaced about eight inches apart down the leg to hold it closed.  I've been in contact with the manufacturer and they are willing to work with me to make it right but as yet we're 'no joy'.  We tried taking it to a tailor today but they don't have the correct parts.  They can special order a whole new zipper that would take "only" seven days to arrive.  Perhaps I shouldn't have laughed at the nice lady at the tailor shop when she said that it would take that long but I couldn't help myself.  We're not going to be at any one place for seven days until at least the middle of June.  Here's a picture of the zipper slider that broke already.  I am certain that Tamara didn't cause this.  She is very careful when using the zippers and hasn't got anything caught in it so far as I know...

Our visit in St. Onge, SD went well.  Tamara got to spend a lot of time with her momma and I got to do an honest day's work for the first time in a long time.  I helped her step-father build a new deck on their house. 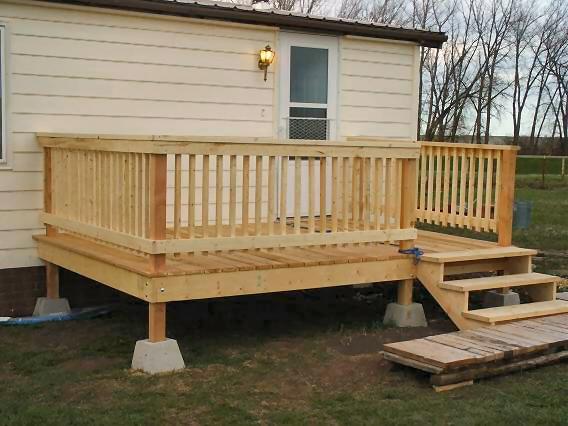 Not bad for a couple retired Squids, eh?  It was actually kind of fun and I used some skills that I haven't used for more than twenty years.  We all went out to dinner in Spearfish at a diner called Sanford's that was pretty good.  It's styled on the idea that you are in an old rebuilt garage.  The tables are all stainless steel and the menu is about 6 pages long.

Tuesday morning came and it was time for us to move on down the road.  I remember the last time we rode through South Dakota in 1996.  We went from Norfolk, VA to Sturgis, SD and back in ten days.  Five of those were spent at a campground in Spearfish.  I remember the trip across South Dakota from Sioux Falls on was not very pleasant because of the cross wind blowing from the north.  This time it was much more than "unpleasant".  Either the wind was blowing a lot harder this time (340°-350° at 20-30 mph according to the XM Weather shown on the Garmin 376c) or I've grown a bit soft in the last ten years.  I really think the wind was blowing harder this time.  We spent the entire day leaned over at a 35° angle to the left trying to keep from getting blown off the road.  We only did 464 miles this day but it was about the roughest 464 miles I've seen in a long time.  One bright side of the whole thing is that the tyres ought to last 460 miles longer than we planned because the center of the tyres hardly ever touched the road the whole day.

We're gonna spend the next day or so in the Greater Sioux Area then it's on to points east from there.