Walk, Don't Run, for the Border

Just make sure you are carrying 50¢ with you.

The last couple days have been low mileage days.  From Kalamazoo we traveled only 280 miles to Seville, Ohio.  We stopped in Seville so Tamara could go to "Crop King".  During her research on green houses and hydroponics greenery stuff the name "Crop King" kept popping up.  Apparently they are a rather large manufacturer/distributor for such things.  So a couple months ago we put Seville, Ohio on our intended route.  Turns out the building in which this particular facility is housed was sold last month and they have been dwindling their stock through attrition and tore down their greenhouses a while back.  There wasn't much to see.  Tamara did manage to get a catalog, at least.

The distance from Seville, Ohio to Niagara Falls, New York isn't very great either so it resulted in two sub-300 mile days in a row.  We managed to snag a room at a hotel within easy walking distance from the falls.  I REALLY like traveling during the 'off season'.  We can afford to do things that we'd never be able to afford during peak season.

With a game plan firmed up we walked out of the hotel bright and early this morning and headed for the falls. 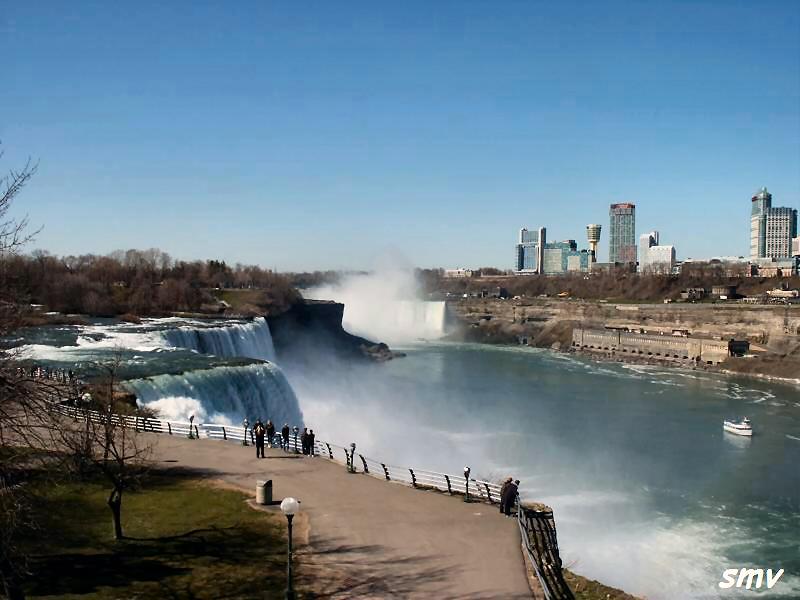 It was a bit 'nippy' so we were wearing our riding jackets as we made our way to the "Maid of the Mist" boat ride.  Arriving there in short order we found ourselves standing in one hell of a line... 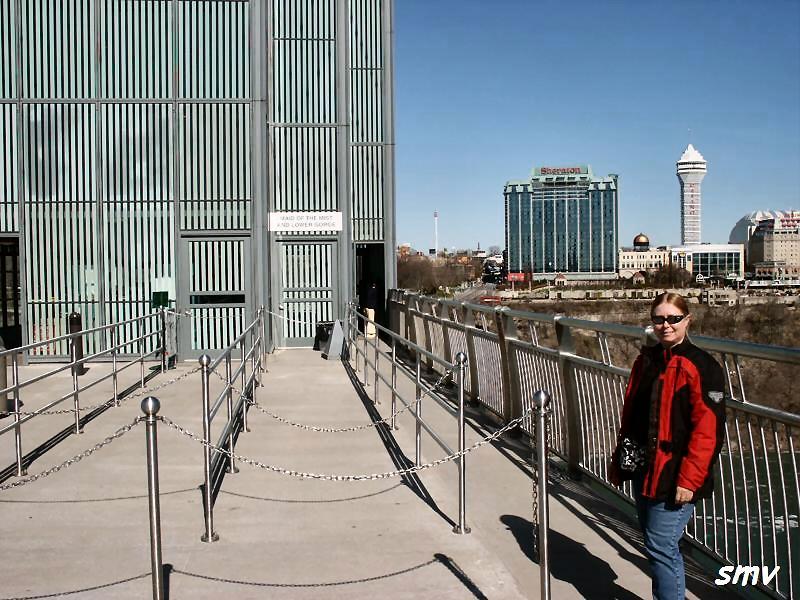 (Did I mention that I really like traveling during the 'off season'?)

It was a pretty neat ride but the thing I enjoyed the most was the idiot who, upon realizing we were headed back to the pier, exclaimed, "We didn't go through the falls!!".  This idiot expected the boat to drive up underneath a water fall spilling 750,000 gallons of water per second over its top.  Sometimes the side shows are more entertaining than the floor show.

After the boat ride it started warming up rather quickly so we scooted back to the hotel to drop off the jackets before walking across the Rainbow Bridge into Canada.  Having passports made entry nothing more than a non-event.  Our goal for the day was to find our way to the Botanical Gardens and Butterfly Conservatory.  We went to a butterfly conservatory in Sioux Falls, South Dakota but because of technical difficulties (read: I'm Stupid) in the operation of my battery charger I was only able to take two pictures while we were there.  Continued technical difficulties later in the day resulted in me formatting the CF card in the camera before I downloaded the pictures and I lost those two pictures.  Having educated myself in the proper operation of the battery charger I was able to take a few more pictures this time around.  Here are a few of the better ones. 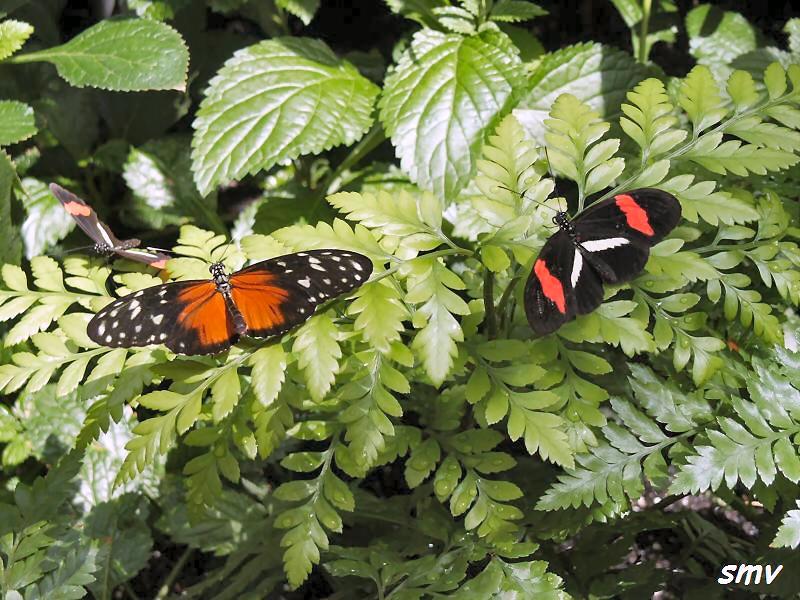 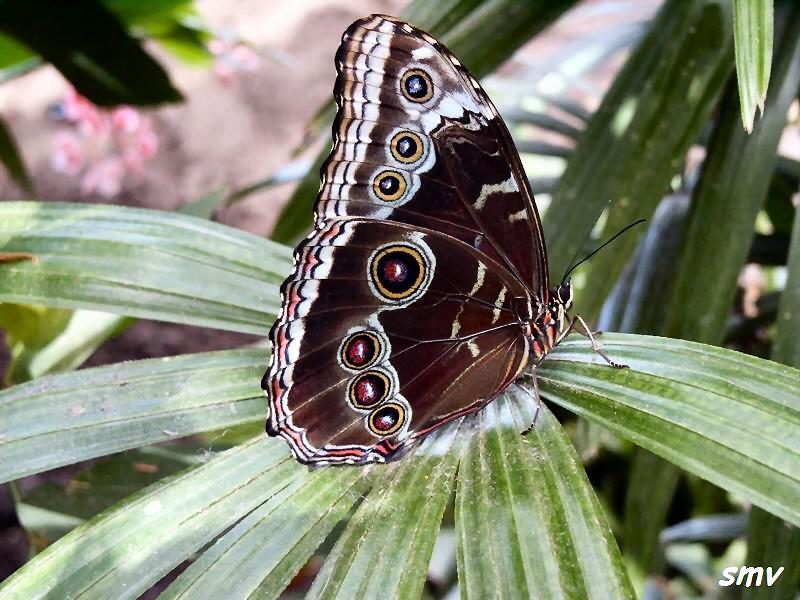 The Canadians have a pretty neat system for getting tourists from trap to trap.  They call it The People Mover.  A couple buses that run full-time and make all the stops.  For $7.50 (Canadian) you get an all-day pass and can come and go as you please.  One thing that I don't really understand, however.  There are signs throughout the Niagara Falls area on the Canadian side proclaiming their pride in the fact that no tax money has been used in the park since its inception in 1885 yet Niagara Parks has been "An agency of the Government of Ontario since 1885" according to the bus passes we received.  So the park is an agency of the government but they receive no tax money?  How else does a government get its money?

One of the People Mover stops is very near the Rainbow Bridge so after we were done with the flyin' bugs we got on the bus and rode it to the end (The Floral Clock) and back down to the bridge.  As we were going through the glass doors to enter the bridge I noticed a couple turnstiles and a big sign proclaiming, "50¢ Toll to cross pedestrian bridge."  What the f....???  It wasn't bad enough that we had to stop at eleventy-billion toll booths on the motorcycle to pay for roads I've already paid for via gasoline taxes, now I have to pay a toll to WALK back into my own country?!?!  I am really getting tired of these eastern states and all their damn tolls!

So far the weather has been very kind to us.  With the exception of that special little slice of Hell in Wisconsin we've been pretty lucky with moderate temperatures and no rain.  I see now on the "Weather" Channel (since when does an earthquake have anything to do with weather?) some of the places we've been are buried under a couple feet of snow and some of the places we're headed are covered with big red "Thunderstorm Warning" squares.  One good thing I see that Texas is supposed to get some rain.  I'm not really looking forward to riding through that heat.  We might have to switch over to night time riding when we get down thataway.