Our Odyssey is complete.

Since the witness for the start of our Iron Butt Association Bun Burner 1500 works late into the night and would still be sleeping when we left the next morning, we had him sign our witness form the night before.  One for me, the pilot, and one for Tamara, the willing passenger.  With our forms signed we set about preparing for the ride ahead and retired to our room.  About 2230 I walked outside and took these pictures 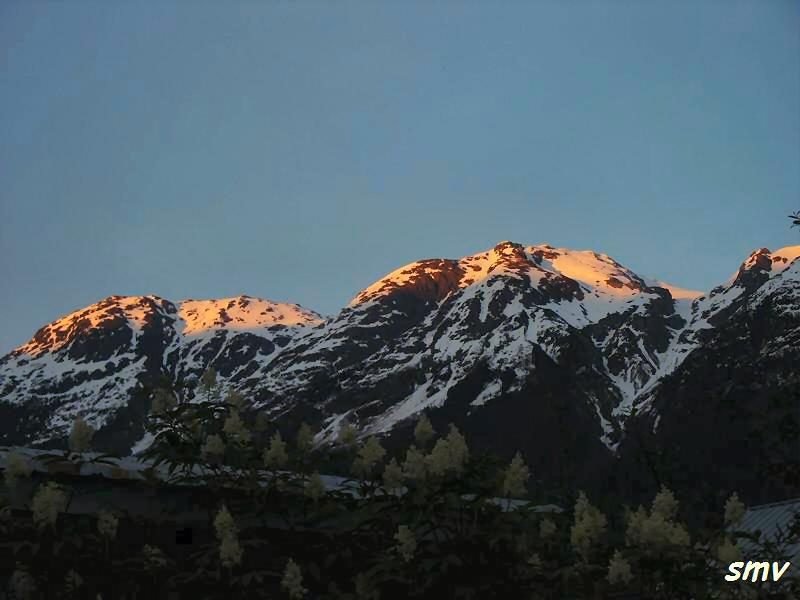 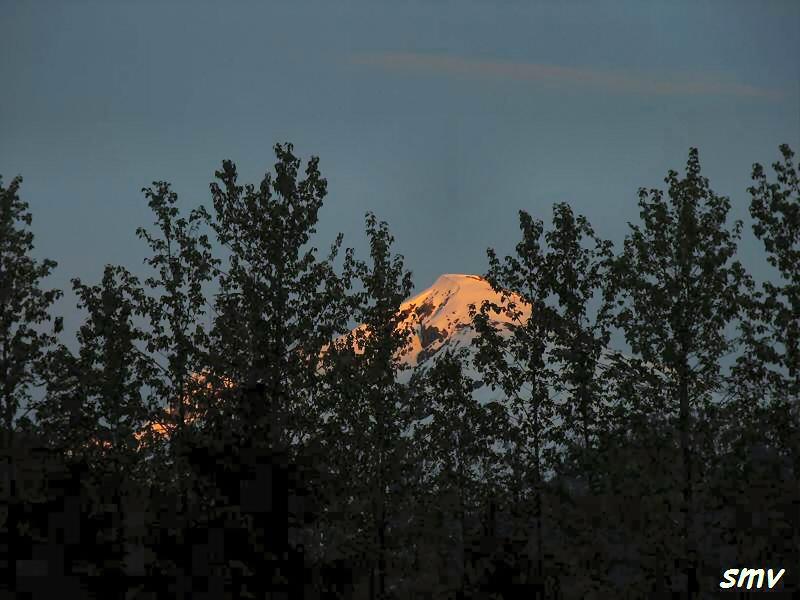 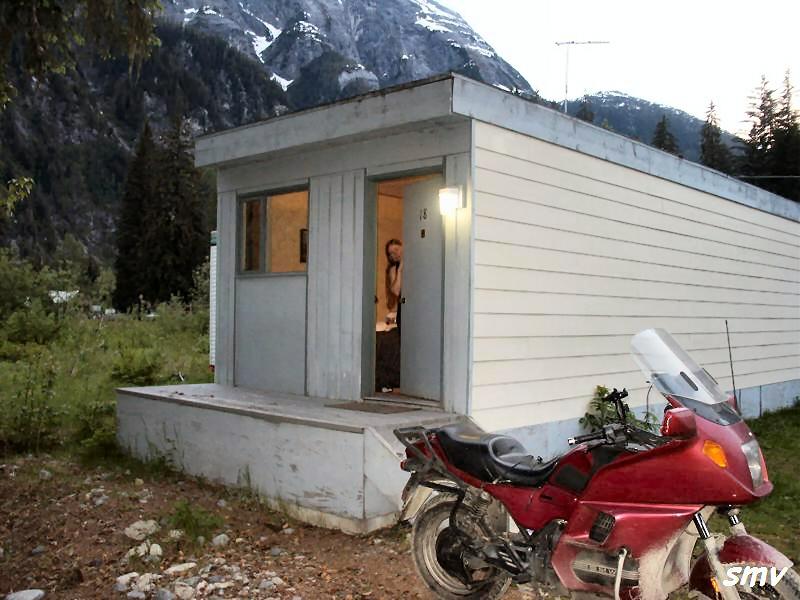 Even though I fully understand the mechanics involved and that the amount of daylight in the winter is drastically reduced, there's just something magical about a place where the sky never gets completely dark.  I'm sure if I lived there long enough it would become blasé after a while but for now it still holds a spark of mystery for me.

With photos taken, bags packed, and alarms set all that remained was getting some shut-eye.  Easier said than done, of course.  After all, I had a few things to think about.  We were planning on traveling more than 1,500 miles in less than thirty-six hours on a motorcycle that already had over 103,000 miles on the odometer.  With an unproven reconditioned and slightly modified final drive installed by unskilled labor (me) using basic hand tools and no torque wrench.  Without knowing for sure what kind of fuel mileage to expect because of a slightly different gear ratio I had no idea what kind of range to expect.  Then, of course, there was the big variable...  The weather.  The last time we tried this we got shut down by temperatures far below freezing.  While I had no reason to expect such cold weather this time, I had very good reason to expect rain most of the way through British Columbia.

Morning came quickly and we were packed and out the door a little before 0800.  A quick stop at the Canadian border crossing for the usual questions... 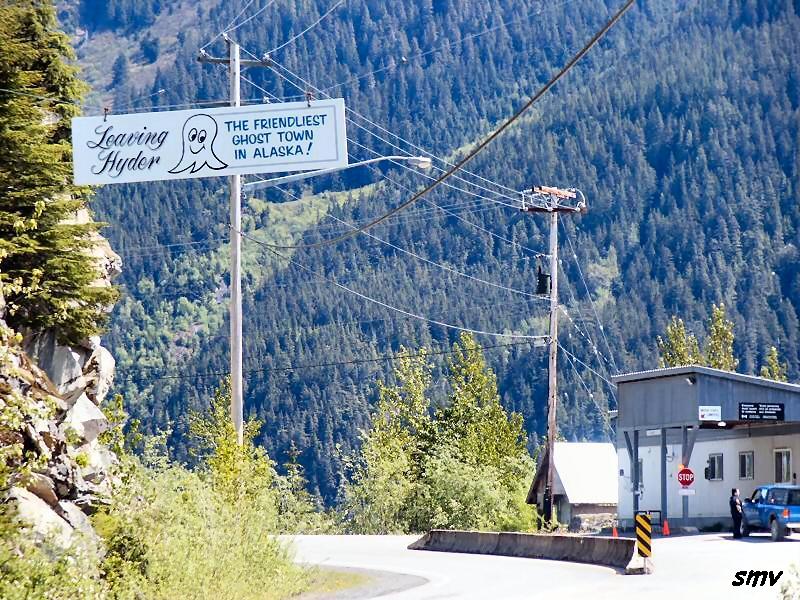 ...and we were on our way.  For the more observant among you, no...  this picture was not taken at 0800.  This one was actually taken our first day in Hyder 'round about noon or so...

We picked up our first gas receipt to officially start the clock on our ride at 0809 Pacific Time.  That gave us until 2109 Mountain Time the next day to get to Butte.  Shouldn't be butt a thing, eh?

As we pulled out of Stewart, British Columbia it started to rain.  At least it wasn't 95°.  Shortly after leaving Stewart we had our first wildlife encounter.  I had to slow down and cross into the other lane to avoid an up-close-and-personal encounter with a large black bear.  It would be the first of five we saw this day.  Along the way we saw lots of animals.  The final tally includes five bears, sixteen (plus) elk, one moose, several red deer, lots of white tail deer, one coyote, two ground hogs, and just south of Conrad, Montana a goose, gander, and eight goslings crossing the freeway.  Fortunately for them the guy driving the van ahead of us was paying attention and avoided hitting them.

Our destination for that night was Edmonton, Alberta.  I'd already arranged for accommodations at a friend's house.  Since he has a garage we wouldn't even need to worry about unloading the bike.  All I had to do was pull in and get off...  Tank bag, GPS, tent...  Everything stayed on the bike ready for a hasty departure the next morning.  They had a bed waiting for us in a nice dark, quiet room.  After a bit of how-do-you-do's we turned in for the night and got a solid night's sleep.  I don't know what time it was when I did finally fall asleep but when the alarm went off at 0700 I was ready to roll.  After a couple cups of wonderfully strong coffee we were headed out the door.  At 0816 we got our "end of rest stop" receipt and turned south.

The rest of the ride into Butte was pretty much uneventful with the exception of some pretty strong crosswinds between Calgary, Alberta and Great Falls, Montana and a thunderstorm hanging out over Wolf Creek, Montana threatening to delay us until it passed.  After studying the weather picture on the GPS for a while and getting a feel for the trend I came to the conclusion that we might get a little wet but we'd miss the worst part of the storm and get through before the next one got there.  As it did in Missouri, it worked exactly as planned.  We got just enough rain I was able to rinse the bugs off my face shield but not so much as to make us stop.  I do have one complaint about the weather picture on the Garmin GPSMAP 376c but that will have to wait until I do my "Gear Review" at a later date.

We had pretty good luck with receipts along the way.  Even if someone wanted to strangle the clerk in Edmonton because neither of them realized the date had changed and it was, in fact, June 2nd and the receipt was correct.  It was an easy mistake to make given the fact she had just completed the longest distance she'd ever ridden on a motorcycle in one day (903 miles) and was a little dingy from being tired.  Fortunatley for us all she decided to confer with me as to how to proceed before throttling the clerk.  The closest thing to a show-stopper we had was the second-to-last receipt at the gas station in Montana City, Montana.  The pump provided receipt had the correct date and time but absolutely no information concerning the location.  Not even as much as the name or identification number of the station, let alone the name of the town.  I took the receipt inside and explained to the lady at the counter that I was on a motorcycle ride and I need to be able to prove "when I was, where I was and this don't say where I was..."  She giggled and volunteered to write the information on the receipt and sign it for me.  I asked her to include the phone number for the station.  As she was writing she paused and looked up.  "Oh-oh...  I almost gave you my cell phone number!" she said.  "No, thank you." says I, "That won't work."  I managed to stop myself from telling her about how my wife wouldn't care much for that...

A bit more strong wind, a couple passes and we were in Butte getting our final receipt at 1905 Mountain Time.  Almost exactly thirty-four hours after picking up our start receipt.  Not too bad considering we took a break in Edmonton for little more than eight hours.

When we started this trip we both figured that by this point we'd be so ragged out from traveling that we would be ssoooo ready to get off the bike.  I find it very telling that we decided to end our ride with a Bun Burner.  We're still talking to each other, still madly in love, and had only one "fight" the entire trip when a big misunderstanding put us both in a very uncomfortable (off-bike) situation.  All along the way we had folks telling us how there's no way they would be able to do what we were doing.  About how their relationship would never survive such an experience.  I guess we're just lucky that we click together so well.

As we bring to a close this ride I must also bring to a close my Travelogue.  We are no longer traveling.  Our next adventure will not be very conducive to 'live' updates, if even email access at all.  I will likely maintain a log of some sort if only to help me from forgetting what I've done with my life.  Whether or not I will ever publish it remains to be seen.

I want to thank each and every one of you who voluntarily added yourself to my distribution list and those of you who provided feedback along the way.  I hope you enjoyed reading these missives as much as I did writing them.  I'm happy y'all were there.  If only to give me an incentive to drag out the laptop every now and then and put my thoughts and experiences to 'paper'.  Without having done this I would most certainly forget a lot of what we have done and experienced on this ride, much like the last time I kept a Travelogue.  Sometimes I'll go back and read what I wrote in the past and think to myself, "Damn...  I'd forgotten all about that."

Sometime in the future I am going to go back though each of my entries and spruce them up a little.  There were many times that I'd send out an update and ten minutes later remember something else I wanted to say.  I won't bother any of you with those updates but I will figure out a way to indicate on the web site that they've been updated.

As I mentioned earlier, I will be doing a piece-by-piece gear review of all the equipment we used on this ride, good and bad, but for all intents and purposes, the Travelogue is done.