Five weeks ago it started raining in Hawaii.  Twice, since then, it has stopped long enough for the sun to peek out from behind the clouds for a few minutes.  Today was the third time.

After leaving Oahu in a torrential downpour and arriving in Maui on Saturday night, Sunday looked like it might be pretty good, so far as weather is concerned.  It didn't turn out to be TOO bad as we traipsed our way up to the 10,000' summit of Haleakala Crater.

The clouds were in and out while we were up there (watched them create themselves right in front of us) but we eventually ended up with a rather nice view, even if it did rain most of the way there and back.

We figured Monday would be a great day to rent a convertible and ride the Hana Highway.

The plan was to swing around down south for a nice road trip.  Boy, were we in for a surprise.  Halfway to Hana (from Kahului) the sky opened up and it started to pour.  Halfway from halfway to Hana we were fording streams running across the road.  There were a couple spots that were a little spooky but I figured so long as I could still see the orange stripes in the middle of the road (where there were orange stripes) we'd be okay. (Sorry, no pictures)  Last time Tamara and I went to Hana it was on a nice clear day.  Getting there we found shirts for sale in the general store that proclaimed "I survived the Hana Highway!".  At the time we giggled to each other how silly they were.  We've been on worse roads than that on the motorcycle.  This time we each bought a shirt.  We felt we earned it this time.  Little did we know...

Parked in the parking lot of the Hasagawa General Store (if they don't have it, you don't need it) we gobbled down some hastily made sandwiches and took off to continue our journey around the eastern lobe of Maui.  After stopping to 'ooh' and 'ahhh' at a couple water falls... 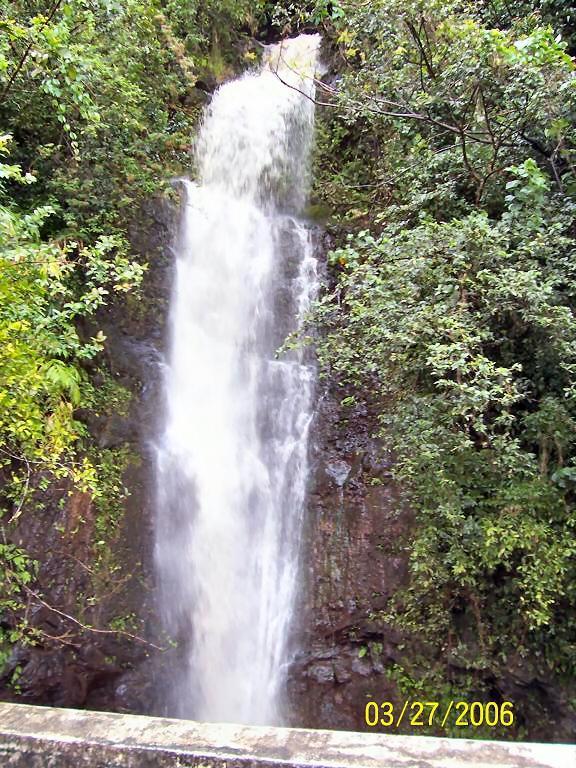 ...we carried on.  A few miles after passing through Haleakala National Park (this time along the eastern edge) we came across a ROAD CLOSED sign blocking our path.  This meant one thing.  We had to turn around and go back the way we came.

This time, however, we were lucky.  The rain had mostly stopped and the roads were clear of rushing streams.  The drive back to Kahului was really rather pleasant and we actually got a chance to drop the top on the convertible and enjoy the view.

A quick stop at Stop Watch Bar & Grill for a bite to eat and we were done for the day.