The last time Tamara and I went to Maui we went on a boat (Sundancer II) that took us to Molokini.  I went to dive and Tamara went to snorkel.  We wanted to do the same thing this time around but got to thinking...  With four of us, two divers and two snorkelers, we'd end up spending as much to have someone drive us out there, tell us where to go, when to go, when to leave, etc etc as we would if we just rented a boat for a few hours and took ourselves.  So that's what we did.  At 0630 this morning we were introduced to a 21' cabin cruiser and by 0830 the introductions were done, the paperwork was complete, the snorkeling gear was rented (we decided against diving after all), and we were shoving off from the pier for a three hour tour...  a three hour tour...

The name of this boat was not The Minnow (it was called Sea Escape III) and I vowed to never wear my sailor hat again so we figured we were pretty safe even if the tune to Gilligan's Island kept rolling though my head as we tacked our way out of the harbor. 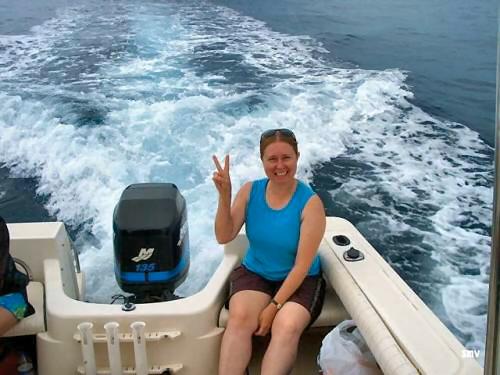 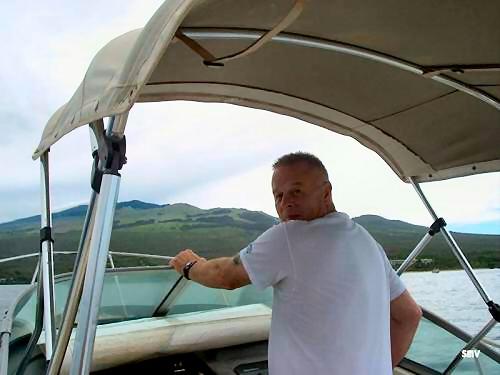 Twenty minutes or so later we were wandering around like lost puppies at Molokini trying to figure out where we could find one of the submerged moorings when I realized someone was calling us on the radio.  It was the captain of the Sundancer II hailing us.  He noticed we were 'lost' and was kind enough to tell us precisely where we could find the last remaining submerged mooring line.  That was mighty nice of him.  He didn't have to do that.  He coulda sat there and watched the floor show as we ambled about trying to keep the boat off the rocks and divers and snorkelers...

After an hour or so at Molokini we decided to hoist in the mooring line and make way for "Turtle Town" a couple miles north.  It wasn't difficult to find the right reef but you'd be surprised at the number of dive boats around here that don't think it's necessary to raise a "Diver Down" flag when they have divers in the water.  Next thing we know we've got some jackass in the next boat over hollering at us about divers and reefs and turtles...  It really is amazing to see two sides of humanity in such close proximity under such similar conditions.

We finally found a place to drop the anchor where we would not crush any coral, turtles, or divers and my dad and I jumped in for a swim.  After a careful scientific study and census, I can safely say that Turtle Town has a population of three hundred fifty-two.  We saw three (maybe four) turtles but after applying governmental statistical reasoning we came up with the number three hundred fifty-two.  After all, we wouldn't want the turtles to lose their hot lunch program, right?

Not sure what we are going to do the next few days.  We fly out Friday night with a layover in Honolulu, LAX, and SLC.  Arrive in Butte sometime Saturday afternoon.  Tamara has a nag ride into the crater scheduled for Friday.  As much as I like riding horses (one of the requirements for our job this summer is a familiarity with horses) I cannot see paying someone $154 to allow me to ride their nag into a desert-like volcanic crater.  Not my idea of a fun time, for sure.