We last left our intrepid explorers in Groton, Connecticut.

So far along the way we've had rather mild weather.  With the exception of the hellacious winds for a few days, we've been real lucky as far as the weather goes.  Until this leg.  I am very happy to report that my First Gear jacket and pants passed their trial by water with flying colors.

It started raining almost immediately upon our departure from Groton and didn't stop until we were near Annapolis, Maryland.  My gloves were soaked through and my boots were soaked through.  Everything between my ankles and wrists, however, was bone dry.  Tamara's gear didn't fare as well.  While she stayed reasonably dry and comfortable, she had another zipper failure on her pants.  This time on the fly rather than the leg.  Same cause as before.  The sliders seem to be made from pot metal and are quite fragile.

About half way between Groton and Hollywood, Maryland we got in touch with Dock.  Dock was my dive buddy on Guam.  A more perfect dive partner would be very difficult to find.  Not only was he retired from the Navy and could go diving pretty much at the drop of a hat, he also likes the same kind of dives I do.  One of the best things that made us such a good match was our nearly identical air consumption rates.  Dock and is wife, Debby, wanted to ride out and meet up with us along the way.  We made plans to meet them at the Greene Turtle in Edgewater, Maryland and headed back out into the rain.

After grabbing a bite to eat at the Greene Turtle (Hint: BBQ Hog Wings have nothing to do with chicken) we headed down the road to Dock and Debby's place.  A bit of confusion about where he wanted me to park and an unexpectedly uneven surface joined forces with my rain-induced fatigue and heavily loaded bike during a bar-locked U-Turn and I dropped the bike on its left side.  After exchanging a quick, "Are you okay?" with Tamara I set about picking it back up...  With a bit of Dock's help the bike was quickly righted and the damage assessment begun.  Immediately noted was a crushed mirror (just the glass, not the pod) and a broken saddlebag hinge as well as a few scratches here and there on the bike and a bit of tranny fluid escaping from the vent (at least I hope there's a vent up there).  Not so immediately noted (a few hours later, actually) I noticed my left shoulder hurt a lot more than normal.  There's also a little ding in my helmet.  Even though we really had no forward motion to speak of when we toppled over, the damages could have been a lot worse had we not both been wearing full gear.  Without my First Gear jacket I'm sure I would have tore up my shoulder pretty bad on the asphalt.  Without my helmet I'm certain my head would have been hurt pretty bad.  Try planting yer head onto concrete from six feet up and see how it feels.  Tamara came away unscathed, physically, but without her gloves and jacket I'm sure we would have been picking sand and gravel outa her skin.  All The Gear, All The Time (ATGATT) is the only way to go.  When "It" happened I tried to recover before we fell over but by the time I noticed what was happening the only way to "fix" it would have been to give it a handful of throttle.  Problem with that solution was where that would have taken us.  Straight into a steel shed after glancing off a power pole.  What caused all this?  Simply put: Stupidity.  Tamara and I have done full-lock U-Turn maneuvers countless times.  Even fully loaded it's really not a problem so long as you maintain precise throttle and clutch control coupled with a trailing rear brake.  The problem comes in when you're not paying attention and the surface suddenly changes level.  Where it went from asphalt to concrete was a little bit of a lip as well as a change in angle.  The combination of these two factors caused the bike to lean over a bit too far and over we went.

Debby was gracious enough to volunteer her sewing machine and her tailoring services to take a preemptive strike against the last remaining functional zipper on Tamara's riding pants.  She installed the spare we bought in Bloomington, Michigan over the top of the original.  I'm certain it was only a matter of time before that last zipper blew out and it looks like we're heading into some pretty nasty rain the next few days so it's really nice that we're better prepared.  Tamara is very happy with how much easier it is to work the heavy-duty zipper and has one less thing about which to worry.

We spent Sunday working on the bike, browsing the Patuxent River Naval Air Museum, and exploring the Point Lookout area of Maryland.  There is a lot of history around this area.  Not much of it of the "happy" variety. 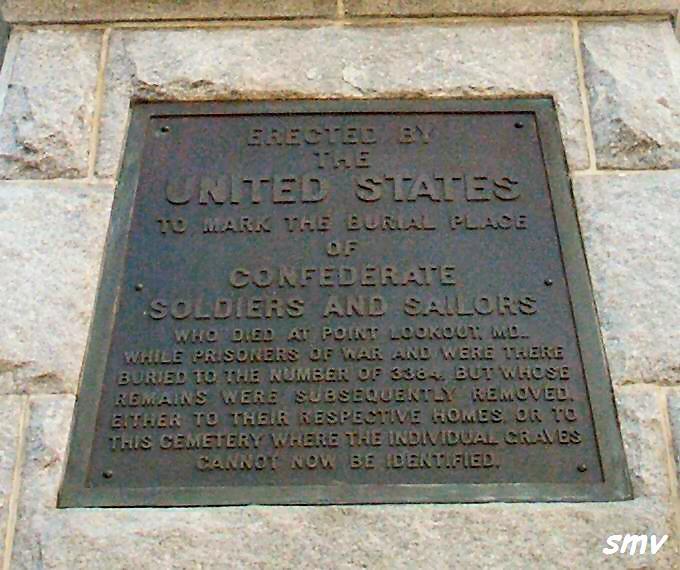 I replaced the 55 watt bulbs in the driving lights with 100 watt bulbs.  Even though they still cast a bit of yellow light because of the "Dichrome" reflectors, they do put out a lot more light than they did before.  Hopefully they make a difference.  I also did an oil change on the bike although it didn't really seem to be necessary.  It was still real clean and there wasn't any of the customary sludge I normally found every time I did an oil change the last eight years.  One interesting note...  After 93,000 miles I think the piston rings have finally seated in the cylinders.  Up until right before we left Hawaii I was adding a quart of oil about every 1,500 miles.  We've gone a bit over 4400 miles so far in the last two weeks and it's hardly used a drop...  Go figure...

Tamara wanted to go to the National Zoo 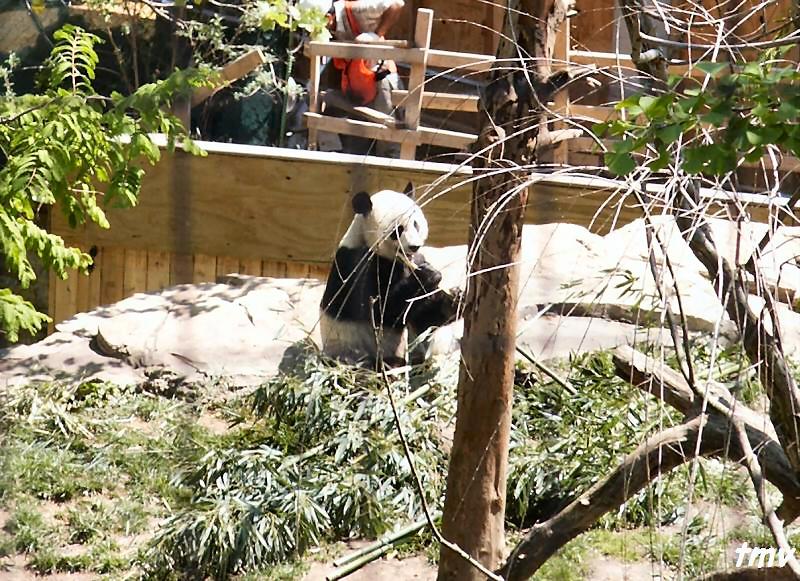 and the National Museum of Natural History.

Not being much of a fan of caged animals (I prefer to see them in their natural state) or stuffed animals (refer to my previous preference) Dock and I made plans to go to the National Air and Space Museum while she was doing her thing.  After spending a couple hours browsing the National Air and Space Museum (and paying 10% sales tax on lunch) we wandered over to the Navy Memorial where I saw this. 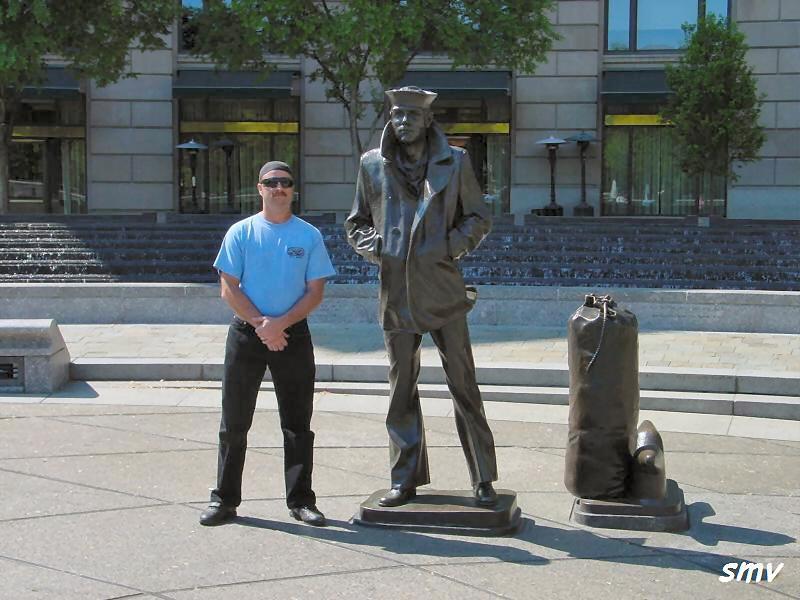 The really cool thing about this is the retirement gift I received from my last command during my retirement ceremony was a figurine based on this sculpture.

I never imagined I'd get to see the real thing up close and personal.

Dock and I soon found ourselves at the National Museum of Natural History where we met up with Tamara and snuck a quick peek at the Hope Diamond on display. 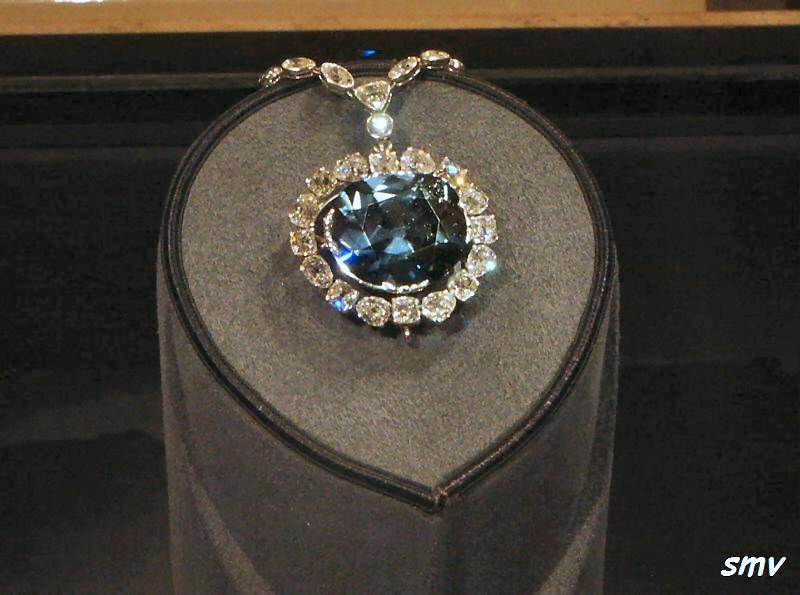 I gotta admit, I wasn't really impressed.  I suppose it's really neat if you are into that kinda thing.  Shiny baubles have never really captured my imagination.  I suppose if someone offered to give it to me I'd thank them (then head for the nearest pawn shop) but it really didn't do much for me.  Perhaps it's because I don't see much "function" in all that "form", eh? 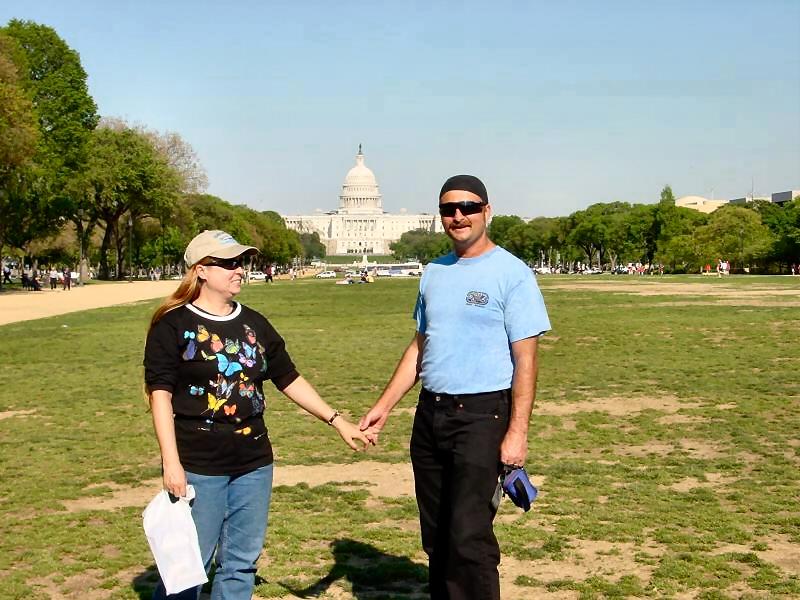 Then we made our way back to the Metro station and went on back to Dock's house.

On the morning we went to Washington, D.C. we swung by a glass shop to get the crushed bike mirror replaced.  We managed to catch the guy just as he was leaving for a job in the field.  For ~$20 they placed a new piece of shiny glass in the pod.  Pretty good deal considering if I had to replace the whole thing it would run ~$270.  I am having a bit of a problem with it, however...  The glass is heavier than the original and it won't stay in position (I can fix that with a wedge of wood) but the real disturbing part is that I somehow ended up with a mirror that magnifies everything about 2x!  It brings to life the thought-provoking line from that Meatloaf song, "Objects in the rear view mirror may appear closer than they are."  It is very startling to see a vehicle (in the right mirror) move over behind me from the right lane only to appear to be about to run over me when it gets into view in the left mirror.  That sudden jump in size and apparent decreased distance is very disconcerting.  The upside of it is that I can read the license plate of a vehicle that is still ¼ mile behind me!  ;)

We hung around Dock and Debby's until 0900 this morning so I could call Bob's BMW in Jessup, Maryland to find out if they had any tyres for the bike and if they'd be able to fit them today.  Being connected to an answering machine because the service department was too busy to answer the phone did not bode well but I left my name and number anyway.  About twenty minutes later they called back and told me that not only did they have the tyres but that I could come right down and they'd hook me up.  I've had dealings with Bob's going way back to when my fuel pump died on Guam.  I've been very pleased with them all along and was more than happy to "come right down".  A few weeks ago I tried contacting Hammerseley Motors in Lynchburg, Virginia where I originally purchased this bike nearly 10 years ago, to the day, but they never got back to me.  Oh well...

Having gotten very well practiced at loading up the bike, we were ready to roll in very short order.  Dock gave me a couple straps to ensure the saddle bag with the broken hinge didn't pop open and spill its contents all over the road.  A quick jaunt (about 1½ hours) later and we were pulling into the parking lot at Bob's.  After a bit of discussion and some careful consideration it was determined that we really didn't need a new rear tyre yet, nor would we need one for some time to come so I ended up getting only a new front tyre...  and new rear brake pads...  and a couple FogCity fog shields for our helmets...  and all new hinges for both saddle bags...  and a balaclava for Tamara...  It's probably a damn good thing that they didn't have the K1200GT in yet (end of next week) or we'd probably have left with one of those as well.  I am not at all disappointed in the service we received from the fine folks at Bob's BMW.  It wasn't until very recently that I realized they were actually more than just a catalog store...  They've got a full showroom, a museum of old BMW's, and (unlike most other dealers) DEMO BIKES and LOANER BIKES!

Because of the delay in Jessup (that was actually supposed to be a full day in Lynchburg) we didn't get very far today.  A whopping 168 miles.  We "pushed" on for a grueling ride into Ranson, West Virginia and stopped early.  Now that we're off the freeway for the next couple days we're gonna be traveling laid-back style but we want to do it during daylight hours.  Not only because it's going to be a beautiful ride but also to reduce, however slight, our likelihood of a deer collision.