There is, apparently, no "off season" in Key West.

I am really going to try to keep this positive.  First off, however, I am going to be straight up with you here.  I really did not like being in Florida.  I have never been happier to leave a state than I was when we crossed into Alabama.  Why?  Simply put, Florida has the Worst Drivers Ever.  As of this writing, I have driven/ridden in 49 of the 50 states (I've been to Alaska but only as a pedestrian), Guam, St. Maarten, Mexico, and Canada.  I can say, without reservation, that Floridians are the least considerate, least competent, least decisive drivers I have ever had the displeasure of witnessing.  I would rather spend a week driving around in downtown Manhattan (did that in '98 in a Chrysler LeBaron) than drive for a single day on "The Main Street of Florida".  I would certainly feel a lot more safe.  Okay...  Enough of that...  On with the festivities.

We somehow survived the night in Jacksonville, Florida.  Until now, using Internet to book our accommodations a day or so in advance (via triprewards.com) has worked out very well.  The places we've stayed through this travel reward program have been clean, reasonably quiet, safe and secure "feeling", etc etc.  Until now.  Somehow we ended up in a "No-Tell Motel".  The lady next door sure seemed to have a lot of friends.  I think she's a preacher of some kind.  Shortly after she took one of her friends into the room you could hear them praying with each other.  "Oh God!  Oh God!  Yes!  Yes!"  Then they would leave looking much happier and she would return later with another lost soul...  Needless to say, I didn't get much sleep.

Our goal today was to make it to Key West.  I've been to Key West one time before about ten years ago.  I was on the U.S.S. John C. Stennis (CVN-74) and we pulled into Fort Lauderdale for a few days.  I jumped in a rental car and headed south.  I eventually found my way to Key West where I saw the "End of the Road" marker, turned around, and went back to Fort Lauderdale.  This time, however, would be different.  This time I would take the time to enjoy a margarita.

After what seemed like an eternal damnation of "Dodge the Idiot" and "Stop to Pay Toll" purgatory that is the Florida's Turnpike we finally made it to the northern end of the Keys on US Highway 1.  Knowing that the price of fuel was going to be a 'bit' higher on the Keys we stopped to top off the tank.  As we were preparing to leave, Tamara said, "Hold on a sec." at which time she turned around, ran back to the door of the gas station store, opened it, reached just inside the door, grabbed a magazine, and ran back to the bike...  I figured she'd grabbed a free tourist guide for the keys.  About the time she was strapping it to the sleeping bag the attendant came running out of the door yelling, "Ma'am!  That ain't free!!"  Seems she was eyeballing the RV Trader but didn't realize it was not a free publication.  We both had a pretty good laugh about that.  Boy, did I give her a ration over that...

I was doing a little cloud spotting (and attempting, poorly, cloud vaporizing) when I saw a cloud that looked like a guy rolling a bowling ball.  By the time I pointed it out to Tamara it had morphed its self into a dragon with floppy ears blowing out a big puff of smoke.  By the time we stopped and got the camera out it looked like a dog chasing a ball. 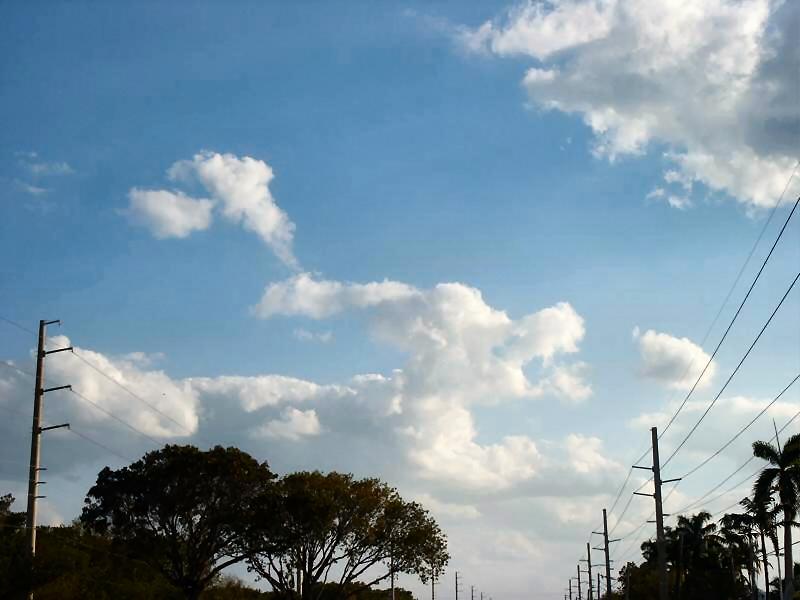 I seem to recall that the last time I was down here the speed limit along the entire Keys Highway was 35 mph because of the Key Deer being endangered.  Either the span of time has distorted my memory or the habitat of the deer has been drastically reduced in the last ten years.  I was very surprised to see 55 mph speed limits from the beginning.  I was shocked when we came across 60 mph speed limits in a couple places.  There still is a "Entering Key Deer" area complete with "Speed Kills Key Deer" signs (why don't the damn deer just slow down a little?) so when we got there I told Tamara to keep a sharp eye out for Key Deer.  Mostly just to keep her occupied and her mind off the fact that we still had over an hour or so before we would get to Key West.  A couple minutes later she surprised me by announcing, "I just saw one!"  It was standing just on the other side of the protective fence grazing on grass.  Lucky her.  I've only see them in pictures.

By the time we got to Key West it was well after dark.  We rode all the way to the end of US Highway 1 and found the "0" mile marker but I was unable to find the "End of the Road" marker this time.  Maybe because I was tired...  Maybe because I was frustrated at not yet being able to find a place to stay for the night (Traveler Tip:  There is no "Off Season" in Key West.  Get reservations before you go or carry a tent with you.)  Whatever the reason we were unable to find it and consequently, have no picture of it...

After giving up the search for the road marker we put our full attention on finding a place to stay.  Every hotel room within 50 miles was taken, the first two campgrounds the GPS guided us to did not seem to exist and things were not looking so good.  Just as I was about ready to turn north and get the hell out we found Leo's Campground and RV Park.  To say it is small, as campgrounds go, is a gross understatement.  We pulled into the parking lot about 2130 and noticed the office closed at 1900 and wouldn't be open again until 1100 the next morning.  After stumbling around a bit and finally figuring out they had the map on the wall completely upside down in relation to the layout of the campground we settled on a spot near the water that looked like it would be a pretty nice place to set up the tent.  I figured we'd claim the spot, walk over to the nearest Bar and Grill for dinner and a margarita, then walk back and set up our magic tent.  We'd pay for our stay before we left in the morning.  As I was leaving the office area for the last time, the manager came out and asked if there was something he could help us with.  When I told him what we had planned he was agreeable with it and told us to hurry because the restaurant closed at 2200.  We scurried on over (about ¼ mile down the road) and had a nice dinner and I finally got my margarita in Key West.  I'm glad we invested in this magic tent because it sure is a breeze to set up.  Even in near total darkness, after a couple margaritas, and trying to be real quiet.

The next morning came quickly and we finally got a good look at our camp site. 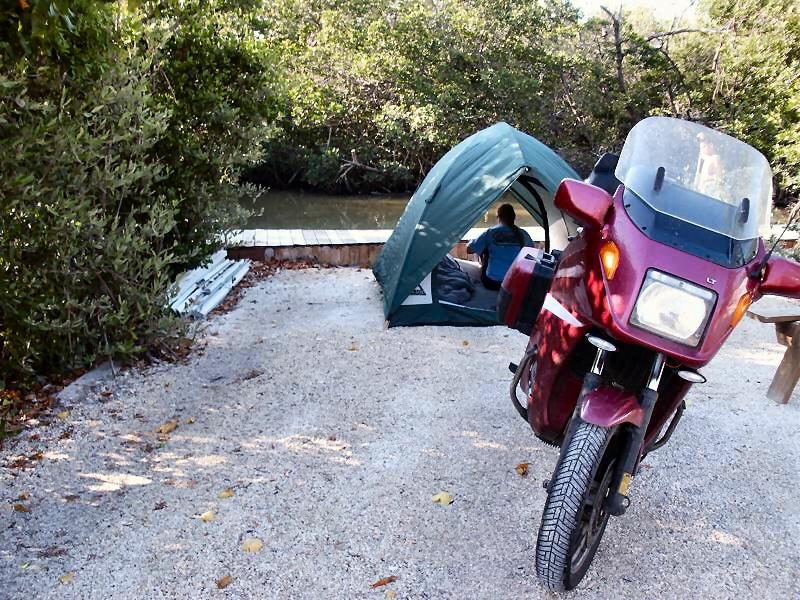 It's amazing just how comfortable pea gravel can be to sleep on...  I (well, my back, actually) prefer a stiff mattress to a soft one any day.  With a little shuffle here and a little shuffle there you can get that pea gravel to form fit to your body quite nicely.

Once again, Magic Tent to the rescue...  It breaks down just as easily as it sets up.  In short order we were ready to leave but had to wait around for a while for someone to come take our money from us for the tent site.

The worst part of visiting Key West on a ground-pounder vehicle is there is only one way in and one way out...  Back up the Key Highway...  It would be okay if the scenery changed now and then, but there's only so many variations of billboards...  The next time I come back I'll be flying my own amphibian.

The bike is running better than it has for years.  Not even the 14,000 miles I put on it the four months I was in San Diego was able to 'clean' it out the way this trip has.  It hasn't used a lick of oil (as opposed to the quart I was adding about every 1500 miles a year ago), the mileage problems I was having have vanished.  Even running 75-80 all day long still nets us 40+ mpg as heavily loaded as we are.  We've seen a couple 50+ mpg fill ups.  It will be rolling over 100,000 miles on the odometer sometime in the next couple weeks or so.  About the only bike-related problem I am still having is the aux lighting.  Even with the 100 watt bulbs they don't add much visibility.  I think the reflectors are designed more for looks than looking.  They give off a bit of a yellow color.  I'm thinking of finding some heat resistant reflective paint to try painting the insides and see if that helps any...

Next stop: Orlando.  Give me strength...