Sometimes fate smiles on you only long enough to get you to drop your guard.

We pulled out of Prince George way behind schedule.  It was just so damn comfortable in the Ramada that we really didn't want to leave but we had places to get.  Hyder, Alaska, to be exact.  After 14,000 miles so far on this trip, Hyder was a mere 473 miles further down the road.  Nothing but a thing, really.  Today, however, was to be a little different.

Soon after filling the fuel tank we were headed west on Canadian Highway 16.  On the way out of town we fell in behind another motorcycle that looked vaguely familiar.  As we drew closer I noticed what appeared to be an Iron Butt Association license plate frame.  Hmmmm...  A red V-Strom 650...  An IBA plate frame...  A guy with black and red riding gear...  This could very well be Garth, our soon-to-be roommate in Stewart, British Columbia (who we'd just met a few days earlier in Troutdale, Oregon).

Last January, when Tamara and I were planning this part of our trip, we had a hard time finding accommodations in the area.  One requirement of attending Hyder Seek is that you have accommodations before signing up.  That's how tight the opportunities for accommodations in the area can be.  The limit placed on Hyder Seek is pretty much governed by the number of hotel rooms available in the area.  We were not able to find anything available so I put out a request to the Long Distance Riders mailing list.  Garth rogered up and offered the spare bed in his room at fare share.  We really hadn't talked about how or where or when we would meet up so we were a little concerned that we'd get to Stewart and not be able to find him.  As we pulled into Vanderhoof, British Columbia we stopped at a red light and sure enough, it was Garth!

How fortunate!  He motioned that he wanted to stop for a bite to eat and I motioned back, "Whatever" so we pulled into a Subway a little bit down the road.  As we got off the bikes I told him that we oughta go right then and buy a lottery ticket.  After all, how lucky was it that we just happened to meet like that.  Thirty seconds one way or the other and we likely would have never seen each other.  He has quite a bit longer range on his bike than we do so his next expected gas stop was 100 miles further down the road than ours.  To my "lottery ticket" comment he replied, "We just used up all our good luck."  Little did we know.

After a short stop at the Subway we walked back out to continue our ride.  I did a cursory once-over on the bike and noticed a fluid puddled on and under the rear tyre.  Since I didn't remember it being there when we pulled in it piqued my curiosity.  Upon further inspection (taste test) I deducted that the strange fluid was 80/90 gear oil.  Whatever was happening happened rather quickly.  There was no hint of fluid leaks when I did my pre-ride check that morning.  Tearing into the problem I deduced the leak was coming from the oil seal that surrounds the final drive output shaft.  This cannot be good.  Replacing a final drive oil seal, while not an extremely difficult job, can be very challenging in a parking lot with basic tools.  Especially when the nearest available part is in a warehouse over 500 miles away.  Since the fluid leaking and the fluid in the drive looked perfectly clean and fresh Garth came up with the idea of hunting down some Leak-Stop seal sweller and give that a shot.  After consulting my GPS for the nearest parts stores off he went and quickly returned carrying a bottle of StopLeak and another bottle of 80/90 gear oil.  Having nothing to lose I dumped some of the sealer into the bottle of oil and dispensed about eight ounces of resulting concoction into the rear end, buttoned everything up, and off we went.

Wanting to keep tabs on things we pulled over after about fifty miles to check the status of the final drive.  It had stopped leaking and everything looked good.  Fate was smiling so large now I could see her back teeth.

After another seventy-five miles it was time for fuel and another status check of the final drive.  It was leaking again.  Not quite as bad as before, but leaking none-the-less.  Unsure of how much had actually leaked I opened the fill cap for the drive to take a peek.  It was at this time that fickle fate's smile turned into a snarl.  The formerly green and clear fluid was a sickly gray with shiny flecks throughout.  Garth says it looked like a snow globe on steroids.  This is really not good.  The only way clear green fluid would turn that color that quickly was if something was getting ate up between the gears.  We decided it would be a good idea to flush out as much 'bad' fluid as we could so I pulled the drain plug.  That's when these guys made their ugly appearance. (Not the coin, of course, it's only there for a size reference.)

Apparently the cage in the main bearing has decided that 103,000 miles was plenty enough for it and it's job was done.  This is really, really not good.

So here we are, 750 miles from the nearest BMW dealer...  170 miles from our destination...  I could hear fate silently sharpening her knife in the background.  What do we do?  Why, we keep going, of course.  After a bit of consultation we decide that the best course of action would be for Tamara to ride with Garth and for me to carry his back-seat luggage.  After all, if everything went to hell at 100 kph it might be best if there was only me to worry about at the time.

Slowly, bit by bit, we eventually made it to Stewart and to the hotel.  Only 2 miles short of completing our 50-state tour.

The next morning we emptied everything we could from the saddle bags and top box and cautiously motored our way into Hyder.  We have finally made it. 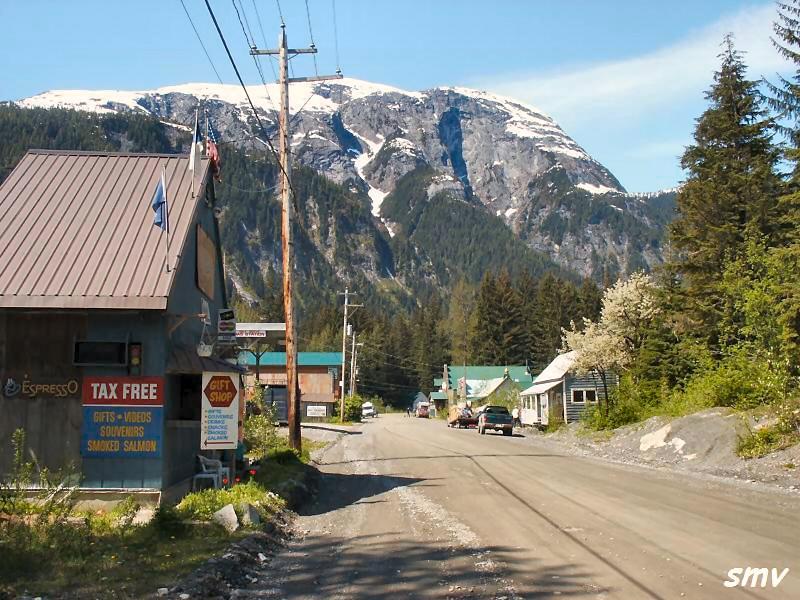 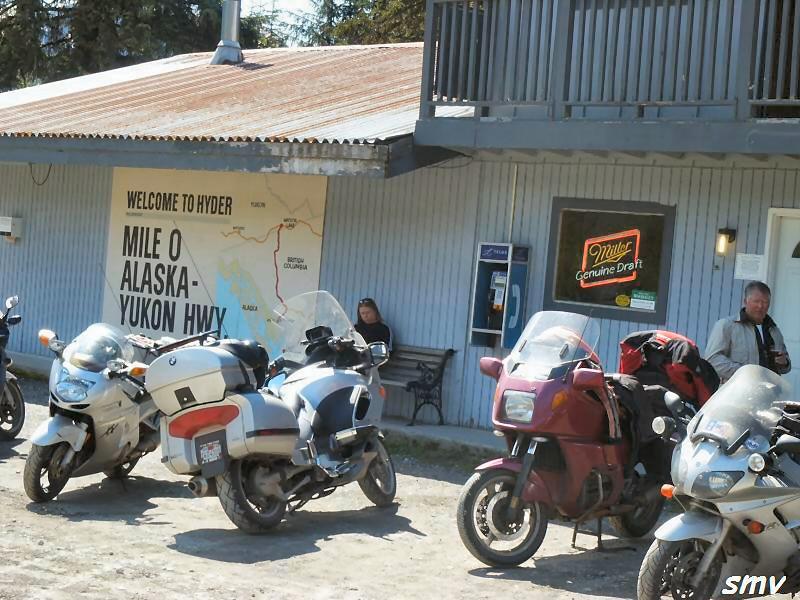 I figured it would be much easier to replace the unit its self than to try to perform open heart surgery on it in the parking lot.  Especially considering that I have no idea just what has happened inside there and how much damage has been done.  With that in mind, I started my search using the hotel's free high-speed internet connection.  After a bit of research (and with a BIG help from someone from the Long Distance Riders mailing list to coordinate between the current owner and me) I managed to locate an entire reconditioned final drive unit.  It is supposed to be shipped tomorrow morning.  When it will get here is anybody's guess.  Mail delivery in Hyder, Alaska happens twice a week.  Each Monday and Thursday the USPS mail plane flies in from Ketchikan, Alaska carrying the deliveries for that day.  It may arrive on Tuesday (this particular Monday is a US Federal Holiday)...  It may arrive on Thursday...  It might even be as late as next week Tuesday before it gets here.  Either way, Hyder is a pretty neat place.  There are much worse places a person can be broke down.  The only solace in all this is that now that we've made it to Hyder on time there's really no place we need to be until June 16th...