Are We There Yet?

We very well could be.

We're still hanging out here in Hyder, Alaska.  We went for a little walk yesterday to look around a bit.  Out of respect for the locals I didn't walk around town taking pictures of everything we saw.  I did, however, take a few pictures on the boardwalk/pier that juts out into the harbor. 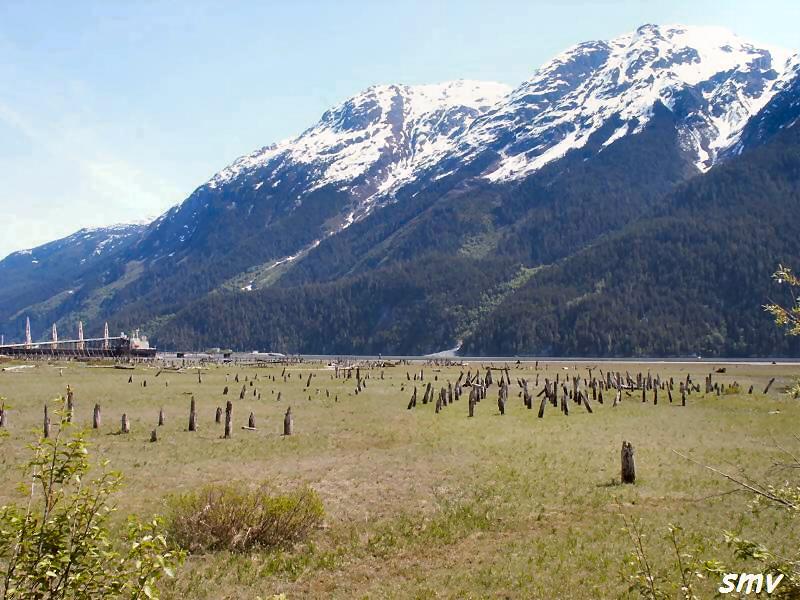 This picture shows the pilings that used to support most every building in Hyder during its heyday when the population (now ~100) was over 10,000.  Those of you with a sharp eye may also recognize the loading ramp being used to load the ore ship on the left of the image. (More on that later) 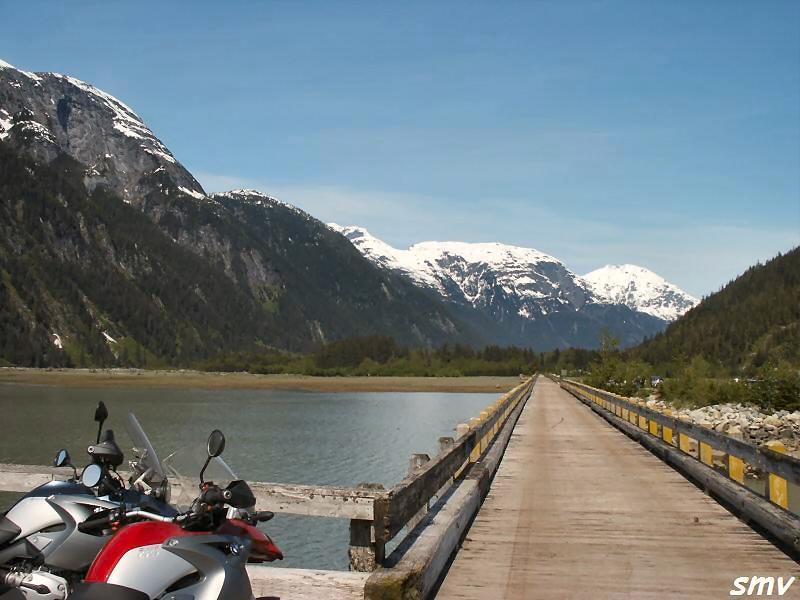 This is a view back down the pier looking back into Hyder across the tide plain.  The tide varies here about twenty feet each day.  Compared to the typical two feet a day in Hawaii that is quite a change. 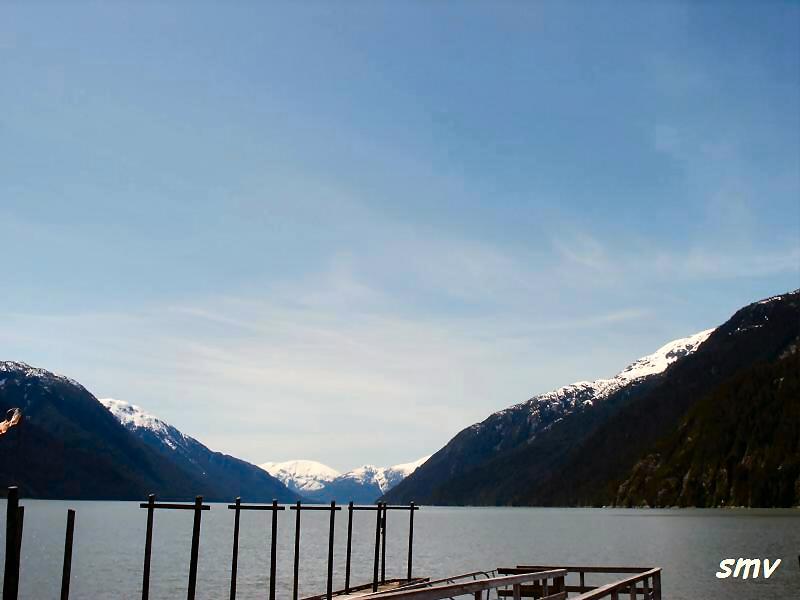 Those with a very sharp eye will certainly recognize the mountain range in the far background.  This mountain range (as viewed across the previously displayed loading ramp) was used as a "passing shot" in the movie "Insomnia".  When the detective was driving out to chase down Robin William's character for the first time, he was headed for a place called Umkumuit.  They showed this scenery as one of the "in passing" areas the detective drove by on his way from Nightmute to Umkumuit.  Problem with this is the scenery shown (the Portland Canal) is 1300 miles east of Nightmute and nowhere near on the way to Umkumuit.  Besides, the view shown in the movie cannot be seen from an automobile (unless it is in the process of sinking) no matter how much 'bling' you've got on your SUV. 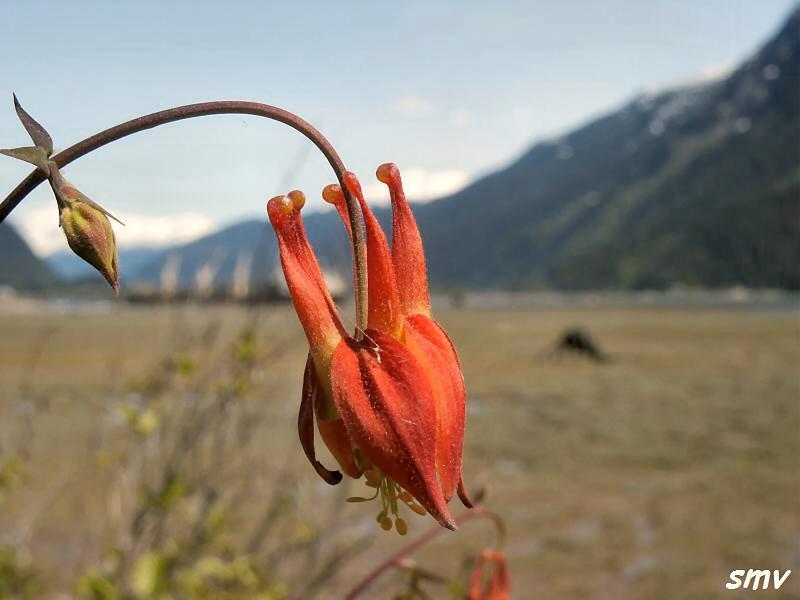 I spotted this flower on the way back down the road leading to the pier.  I just had to stop and take a picture of it...  It's a Columbine in the process of opening.

Earlier in the day we signed up for a "Glacier Tour" and it was getting about time to leave so we headed back to town and got on the tour bus.  Along the way we passed into Canada.  They've devised a very interesting way of letting folks know when they are crossing the border up here.  Rather than using signs or fences or border patrol this is what they've done: 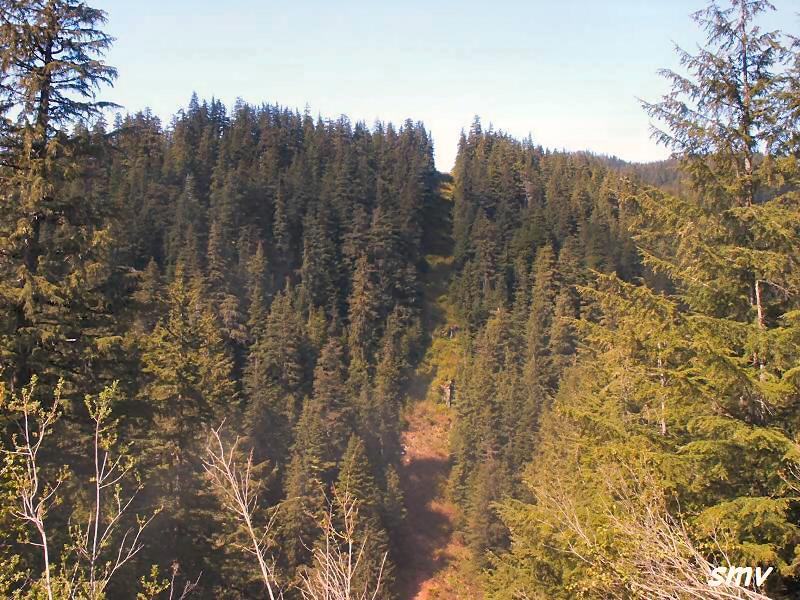 They have literally shaved the border into the forest.  This twenty foot wide clear cut line is marked with 2½ foot tall aluminum-bronze metal cones and extends 1,500 miles from the Portland Channel to the Beaufort Sea.  In this photo, the US side is on the left and the Canadian side on the right.

After about an hour of travel up a well groomed gravel road (there are no paved roads on the US side of the border around here) following Salmon River most the way up, we made it to this overview of Salmon Glacier. 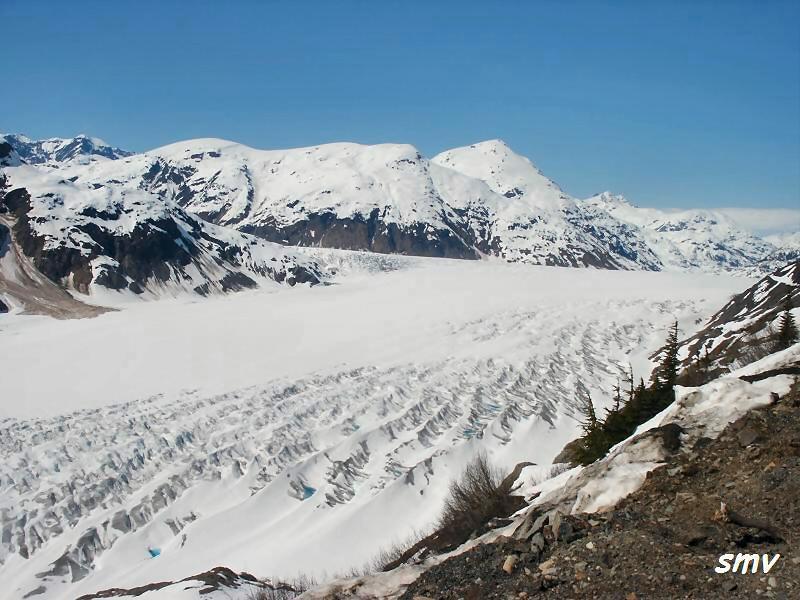 Just when you think the scenery cannot get any better up here, have a look at what was at my back while I took that last picture.

This morning we moved from the King Edward in Stewart to the Sealaska in Hyder.  The owner of the Sealaska has offered the use of his tools, his torch, and (should we need something from Stewart) his truck.  This afternoon he offered the use of his power washer so I could wash the 80/90 off the bike in order to have an easier time taking it apart.

We had dinner this evening at "The Bus".  Fresh seafood is the fare there.  I had a wonderful serving of Dungeoness Crab and a double side-order of smoked salmon pasta salad.

Originally, when we had all the time in the world, we were going to make Hyder Seek one of the first places we went on this trip.  We were going to take the time to properly prepare the bike and ourselves for this trip.  We were going to go to a motorcycle rally or three on the west coast and piddle around for a while in California, Oregon, and Washington before coming up here.  We were then going to continue our trip around the rest of the Lower 48 until it started snowing or we ran out of funds, which ever came first.  Then along came the Forest Service position in Wyoming.  That totally changed our plans because we have to report for duty on 16 June.  There was no way to carry out our original plans and still make it to Wyoming in time so we had to restructure our entire trip.  We had to make a timeline (and stick to it), we had to reverse the route we took, and we had to make Alaska the final destination.  We are both glad things turned out the way they did.  After having been here for a few days there's no way we could have enjoyed the rest of our trip as much as we have.  Nothing we've seen to this point can compare to what we have seen here.  I don't mean just the scenery (however outstanding it may be), I'm talking about the whole experience.  In most of the places we've been since we left Butte on April 8th we've encountered friendly people.  Nowhere we've been, however, has been so completely friendly.  I guess it takes a special kind of person to live in such a place.  I wonder if we've got it in us.

Here are some of the more interesting things I've learned about Hyder since we've been here:

- The last American bank in the area closed on April 15, 1932 so most of the prices in Hyder are listed in Canadian funds.  The merchants prefer to receive Canadian funds because they all use the bank in neighboring Stewart, British Columbia.  With the recent turn of events with the value of the Canadian dollar versus the US dollar, both currencies are pretty much used interchangeably dollar for dollar.  Sometimes you take the (currently) 10% hit, sometimes they take the 10% hit.  Nobody really seems to care.

- Even though Alaska has its own time zone and Hyder is officially in Alaskan Standard Time, the clocks in town are all set for Pacific Time.

- Until about five years ago, most of the kids are schooled in Stewart in Canadian schools.  Their education was paid for by the State of Alaska.  Those that weren't sent to Stewart schools were either home-schooled or sent off to Ketchikan.  Ketchikan is 75 miles southwest of Hyder but to get there it takes a combination of driving and either airplane or boat. Hyder now has its own school at the community center in the middle of town.

The final drive replacement is supposed to arrive on then mail plane on Tuesday.  The plane normally arrives on Monday and Thursday but since Monday is an American federal holiday it won't get here until Tuesday.  It looks like the weather is starting to move in (the weather report/forecast on the Alaskan evening TV news includes terms like "IFR" and "VFR") so I wouldn't be surprised if the plane won't be able to make it Tuesday.

You know what?  The thought of that really doesn't bother me...  Yet.