I think I can say, with a fair amount of certainty, we are no longer in Hawaii.

"What evidence have you?" I can hear you ask.  Well, there's always the GPS.  It tells me I am no longer in Hawaii.  It has, however, lied to me in the past so I will not rest on that evidence alone.  Let's see what else I can produce to bolster my case.

In Hawaii the tide changes very little.  A swing of three feet between high and low tide is most unusual.  Where we are currently, a swing of twenty feet is not uncommon.  While nowhere near the largest tide shift in the world, it is still quite impressive to see the difference between a low tide of -2.5 feet... 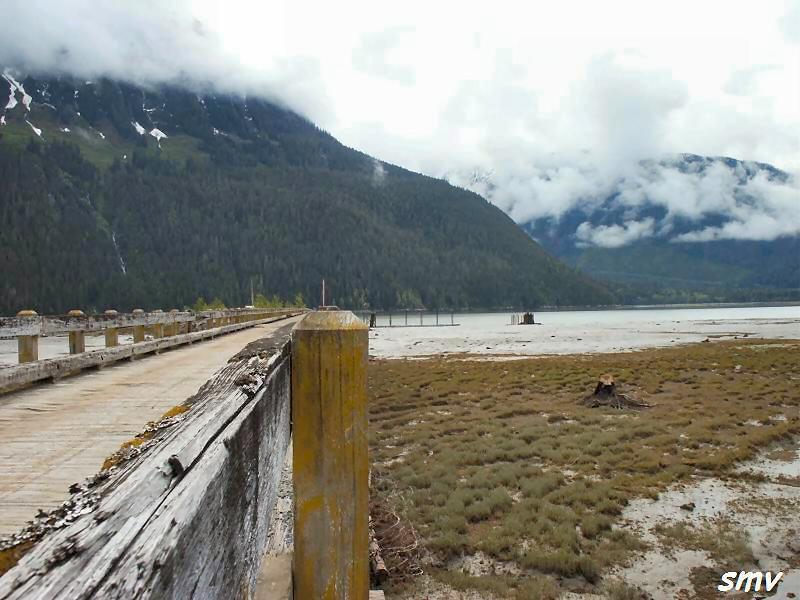 The day before these pictures were taken the tide change was even more extreme.  It went from 18.7 feet to -2.6 feet and back up to 17.2 feet in thirteen hours.  We sat for a few minutes watching the tide come in and flood the area.  There were places where air was being forced from the mud by the incoming water.  You could actually see the water flooding out across the mud flats.

Not enough evidence?  Okay...  How about this picture? 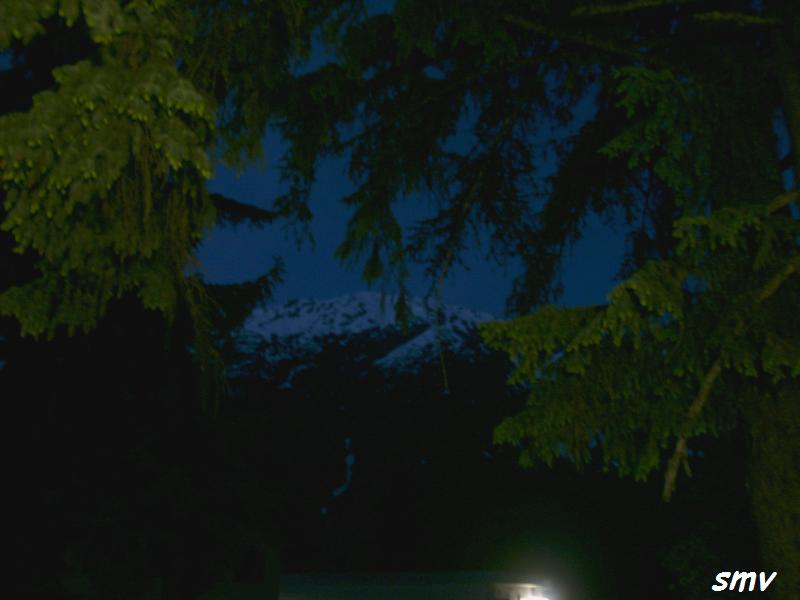 Just some mountain covered with snow, right?  "Hawaii's got that," I can hear you say, "you haven't proven anything yet."

Sure...  Hawaii's got snow covered mountains.  I've seen it myself.  What I haven't seen, however, was a snow covered mountain at ELEVEN THIRTY at night!  That's right.  This picture was taken at 2330 last night.  I used only a 1.5 second exposure time on this image.  That's about all the longer I could hold the camera still freehand.  There was no place convenient to support the camera.  This area has reached that time of year where "Astronomical Twilight" no longer exists, "Nautical Twilight" is but a short couple hours, and "Civil Twilight" comes very late and ends very early.

Still not enough?  Still not convinced we are no longer in Hawaii?  Okay...  Time to break out the big guns, I guess.  How about this?  Last Saturday morning (three days ago), somewhere in New Jersey a man put a twenty pound box on the counter of his local US Postal Service office, addressed it to Hyder, Alaska, and marked it "Express Mail".  He was told by the Civil Servant accepting his package that the package would be delivered to its intended recipient the following Tuesday.  Now, had the package been addressed to someone in Hawaii, even with eleventy-billion flights a day between the mainland and Honoulu, that someone would normally add two or three days to that promised delivery date before starting to become concerned about their package.  That is why I didn't get too excited while helping unload this unique, twice weekly, mail delivery vehicle today. 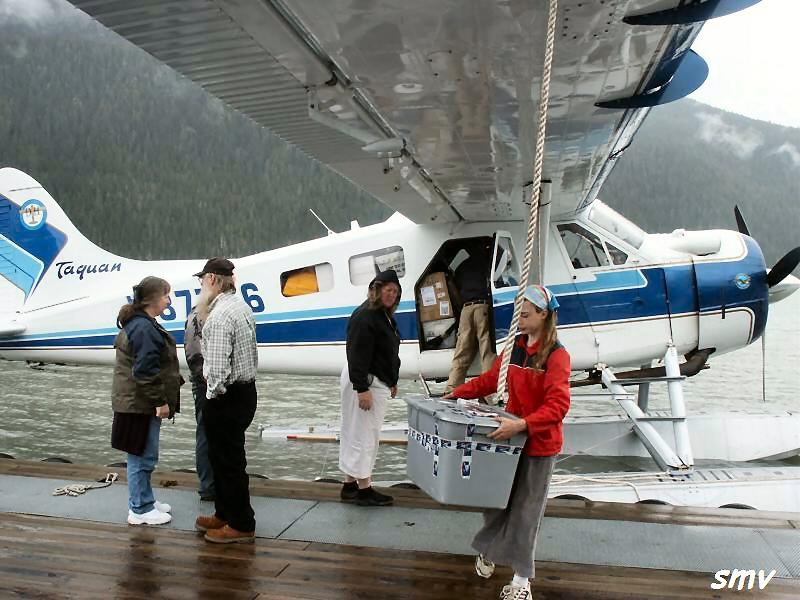 Little did I know the aforementioned package was actually in the airplane, patiently waiting to be unloaded.  After the plane was unloaded I had to walk a mile or so to get to the post office to take delivery of it, but I got it none-the-less.  An interesting journey, this package took.  I'm not sure how it got from New Jersey to Ketchikan, Alaska but some how it got there in time to be loaded on the de Havilland Beaver this morning then flown around the area dropping and picking up passengers to arrive in Hyder at 1400 this afternoon.  It's unique journey was not quite over at that point.  About half way back to the hotel a man in a front-end loader stopped to ask if my parts were getting heavy (we've become quite well known around town) and offered to carry them to the hotel for us.  There wasn't enough room for us in the cab (I did briefly entertain the idea of jumping in the bucket) but at least I no longer needed to carry the box.

To summarize...  The tide swings upwards of twenty feet, twice a day.  The sky never really gets dark this time of year.  Mail deliveries get to their destination on time.  Yup...  I'd bet it's pretty safe to say we are in Hawaii no mo, Bruddah.

Shortly after arriving back at the hotel I started tearing pieces off the bike.  In very short order I had most everything loosened or removed.  All that remained was to take out the two screws holding the brake rotor to the hub.  Simple enough, right?  Wrong...  For some reason these screws seem to be made of a wax-like substance.  At least that's what it seemed like when I went to remove them and spun the holes out of both of them with the hex driver I was using.  When this happened I about freaked.  With these screws stripped there was no way of removing the brake rotor from the old hub.  Without the old rotor we'd have no rear brakes.  At this point things are not looking well at all.  Deep in my new found misery, I started looking about for a set of Easy-Out's.  Even after finding a set I knew the chances of removing the screws were pretty slim.  Even slimmer was finding replacement screws once the original ones were removed.  It was about then that cool, clear logic prevailed.  If the screws were made of such a soft material there's no way they could be intended to absorb the loads induced under heavy braking.  They must be there for a reason but if not to hold the rotor while braking, then what?  Then it hit me...  Those screws are there only to keep the rotor from falling off when the tyre is removed.  The true strength of the system is provided by the four 3/8" bolts that also serve to hold the tyre in place.  I don't REALLY need those cheesy screws so long as I can hold up the rotor, place the brake caliper over the rotor, roll in the tyre, and attach the lower shock mount all while putting in four of the five lug bolts.  While not an easy task, I figured it was much easier than finding replacements.  Eschewing the Easy-Out's I grabbed a 3/8" drill and popped the head off the screws and the rotor lifted right off the hub.

After the rotor was removed the main seal was practically jumping out of position and it wasn't that difficult to pull it out entirely to reveal this:

No...  There aren't any ball bearings missing.  What is mostly missing (you can see some pieces of it remaining) is the cage that is supposed to evenly distribute those bearings around the perimeter of the bearing.  As I suspected, those were the pieces I was pulling off the drain plug magnet a few days ago.  Also clearly seen in these photos is the spring that was previously firmly ensconced in the oil seal.

The most amazing part of this whole affair was the absolute silence in which the wheel rotated with all this happening.  One would fully expect the rear-end to be screaming out in pain while being ridden in such a condition.  One would, at the very least, expect to hear crunching or rattling sounds emanating from within while spinning the tyre by hand.  None of this was happening.  It was absolutely silent.  If the seal hadn't started leaking, I still wouldn't know the bearing was in this condition and we'd be mostly back to Butte by now.  Scary, huh?

We're going to hang out here one more day before heading out.  We're planning on making good on our failed BB15 attempt that got shut down because of the well-below-freezing temperatures we encountered in Wyoming.  If we go though Edmonton, Alberta from here, getting back to Butte, Montana should take us 1,566 miles and a bit under 36 hours, including an eight hour or so stopover.